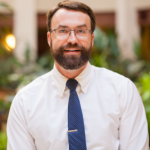 Dr. Brian is a native of Daviess County and is a graduated from Apollo High School. He received his pre-professional requirements at Owensboro Community College and received his Bachelors of Science Degree and his Doctor of Chiropractic Degree from Logan Chiropractic College in St. Louis, Missouri.

Dr. Brian Tinius joined his father’s business in January of 2003. They have been practicing together since.

Dr. Brian Tinius is married to his wife Ashley and has three daughters. He enjoys triathlons, being outdoors, and his cats.

Dr. Greene is a native of Nashville, TN.   He received his pre-professional requirements at Middle Tennessee State University and his Doctor of Chiropractic Degree from Logan College of Chiropractic in St. Louis, Missouri.

He was a member of Chi Ro Sig professional fraternity and the Gonstead club while attending school.

Dr. Greene enjoys growing plants and gardening as well as nature and outdoor activities in his free time.